Bronchitis is an inflammation of the bronchial tubes, which carry air in and out of the lungs during respiration. There are two types of bronchitis: acute and chronic. Acute bronchitis is common, occurring frequently as a complication of a cold or other respiratory infection. Chronic bronchitis, however, is less common and more serious. A person is considered to have the chronic form when the bronchitis lasts longer, up to several months, and occurs more frequently, two or more times a year. Chronic bronchitis may be a precursor of chronic obstructive pulmonary disease (COPD).

Although a typical case of bronchitis is caused by a virus (a cold or influenza), it can be complicated by a bacterial infection. If bronchitis remains viral, antibiotic treatment will not help. However, if bacteria are present, antibiotics may be necessary and helpful.

Pollutants often make the respiratory system susceptible to bronchial infection. The most common pollutant is cigarette (or cigar or pipe) smoke. Many people who suffer chronic bronchitis are smokers or live in smoke-filled environments. Dust, air pollution and airborne toxins, whether at home or in the workplace, make developing bronchitis more likely.

Some people are at much greater risk of developing bronchitis than others. The following factors increase the likelihood of contracting bronchitis:

Babies or young children, the elderly, and those with underlying diseases/conditions that compromise their immune systems are also more likely to develop bronchitis.

Symptoms of acute or chronic bronchitis include the following:

If symptoms last more than a few days, or if they include the following, a doctor should be consulted:

Patients who have asthma, a disorder in which there is muscle tightening and swelling around the airways, tend to be prone to a form of bronchitis called "asthmatic bronchitis." They often have more severe symptoms and should seek medical care.

In order to diagnose bronchitis, the doctor takes a medical history and performs a physical examination. Listening to the patient's breathing through a stethoscope is important, because it allows the doctor to detect wheezing and, to a certain extent, congestion. A mucous sample may be obtained to check for bacterial infection. Usually, the patient's oxygen level is measured with an oximeter. Other diagnostic tests may be used, particularly if pneumonia, or some other complication, is suspected. These tests include chest X-rays, lung-function tests and blood tests.

If the bronchitis is viral, it usually resolves on its own in a few days. Resting and drinking fluids can decrease discomfort, and speed healing. If symptoms are severe or persistent, a physician, who may prescribe antibiotics or administer further tests, should be consulted. Patients who have chronic asthmatic bronchitis may be treated with corticosteroid inhalers or other medications, sometimes administered through a nebulizer, to keep their airways open. Patients with chronic respiratory ailments should be vaccinated for influenza and pneumonia. 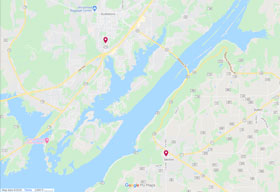